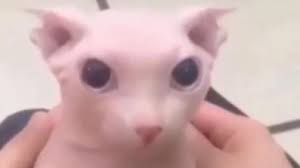 What does Bingus stand for? You’ve probably heard great YouTube personalities and content creators mention it, or just use the term randomly. It’s just a strange inside joke that became popular because of Corpse Husband shouting it out in his Among Us games.

What exactly is Bingus, you ask? The answer is a hairless sphinx cat that became popular on Instagram in March of 2020. This cat’s popularity has been growing again throughout the second half of 2020, due to YouTuber Corpse Husband.

Where did the hi Bingus meme come from?

The cat’s moniker is Bingus, according to the meme. The video was originally uploaded by a user called “Subaru Rocks” on Instagram. Countless meme accounts reposted the clip under the name “Bingus,” and the name has stuck. It’s uncertain what the cat’s real name is, but it’s officially known as Bingus

The meme went from strength to strength following these Instagram posts, and it subsequently accelerated even more when it got to Reddit. In September 2020, user u/haydongers posted an image with the title “AHHHHHHHHHHHHHHHHHHHHHHHH” on /r/ambien (a subreddit dedicated to “things you did while on Ambien”), which spread like wildfire across the internet.

Among Us streamer and recording artist Among Us has mentioned the bald cat on both his main Twitter account, Corpse_Husband, and his alt CORPSE_alt numerous times.

During his Among Us streams, he has also used Bingus as his ‘activation’ word. When he is the imposter and someone shouts ‘Bingus!’, he will kill whoever they stand next to, in a similar way to Valkyrae’s ‘Babushka’.

The phrase has grown into a type of inside joke among the Among Us group and its followers on Twitter, with gamers killing others with it and joking about it later. Sykkuno inadvertently calling Bing Bong, Bingus, or Inside Out caused the term to trend on Twitter for hours.

Playing Rust Corpse made a sign on Sykkuno’s house, where he wrote out Bingus in his own writing to try and impress Sykkuno, who loved the addition. A highlight of the moment was blown up on Twitter as fans shared their favorite moments from the Bingus meme.

Is Bingus on Social Media?

The cat in the original clip, which was posted on Instagram, was identified to be from China. On Discord, a user discovered the owner’s Douyin account (a Chinese version of TikTok). This allowed people to locate the owner’s TikTok account. The owner has unfortunately deleted his/her TikTok account.

In terms of technology, the internet may have come a long way. However, it appears that online meme culture is still very comparable to its inception, as a cat is still the topic of everyones’ attention.