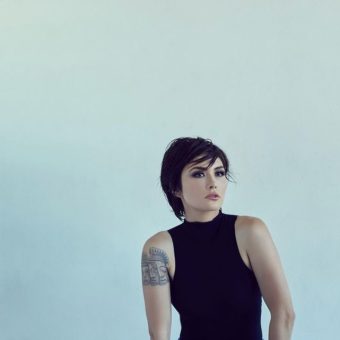 Daniella Pineda has been steadily working for a decade, with recurring roles on The Originals, American Odyssey, The Detour and more under her belt.

And you’re about to see a lot more of her: she’s set to star in the highly anticipated upcoming remake of Cowboy Bebop, which lands on Netflix on Nov. 19. The Mexican American actress also appears in the next installment of the Jurassic World franchise, and is currently filming a movie called The Plane.

Some Facts on Daniella Pineda

Daniella Pineda is a Mexican American actress who starred as Sophie in the CW’s series The Originals. She was cast in the 2018 film Jurassic World: Fallen Kingdom.

In 2019, she landed roles in two Netflix series, Huge in France and What/If.

She was raised with her family in Oakland, California. She has a younger brother named Elliot.

Raised in East Bay Area, California. Pineda is of Mexican descent, and graduated from Mills College.

By April 2019, Pineda had been cast as Faye Valentine in a live-action version of the Cowboy Bebop series.

In August 2021, Pineda was cast in The Plane, starring Gerard Butler in the lead.