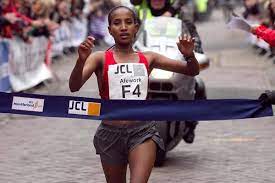 Chepkemoi was born in Kenya in 1987. Her spouse, Henry Kipsang, and his brother Salim Kipsang are both runners.

She lives with her husband and son in Eldoret. Patrick Sang, a former Kenyan runner who is now a coach, leads the group of women that Chepkemoi trains in near Lake Victoria at Kaptagat on the Great Rift Valley in Kenya.

Chepkemoi has won at least three first places in Austria, France, and the Netherlands in each of the last two years. Chepkemoi made her mark when she took sixth place in the Dubai Marathon and fourth place in the Toronto Marathon in 2011.

She ran a personal best of 52:46 for 10 miles and was second in Amsterdam over 10 kilometers (and second again to Paula Radcliffe), as well as 25 kilometers (and third this time to Priscah Jeptoo).

Some Facts About Diana Sigei Chepkemoi