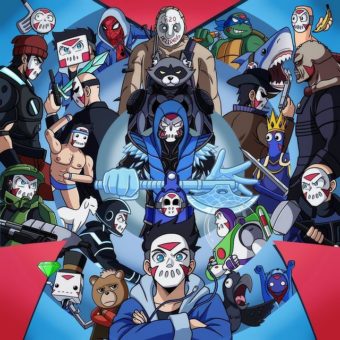 H2ODelirious real name is Jonathan, is an American YouTuber and video game commentator from North Carolina known for his Psychotic laugh, sometimes misspeaking and gaming videos.

Delirious’ content primarily consists of him doing Let’s Plays of video games, or just messing around with his friends. He is known to have a large group of friends, which he commonly collaborates with in his videos

Delirious also does solo Let’s Play videos, playing single-player games, commonly playing the campaign mode. WatchMojo describes Delirious as “a person who truly knows the art of Let’s Plays and doesn’t let reviews or other disturbances to hinder his playthrough.” Delirious is well-loved for his crazy style of gaming, such as not knowing what is going on and freaking out at every jumpscare. Additionally, he is known for his contagious psychotic “Delirious” laughter and the reason his voice is weird and unusual is because he has a bad microphone and, interestingly enough, he still uses that bad mic.

Who is the wife of H2ODelirious?

Due to the line between his YouTube life and personal life, not much is known about Delirious in real life. He is originally from North Carolina, but has since moved to Virginia. He has never revealed his face in any of his videos, which has led to much speculation among his fanbase.

In fact, his face still remains a mystery. Fellow YouTuber and collaborator CaRtOoNz is the only person known to know what he looks like since CaRtOoNz dated Delirious’ sister in the past. His last name is rumored to be either Dennis or Smith but neither are confirmed.

Delirious’ appearance resembles that of his GTA V player model and his Xbox avatar.

Delirious is dating cosplayer Liz Katz. However, when and how they started dating remains undisclosed. The relationship has been confirmed on Twitter through numerous posts. The two stated that they were expecting a child in the fall. On September 9th, the child’s gender was revealed to be female.

On May 23rd, 2021, due to growing conflicts between his friends and fellow YouTuber Ohmwrecker, Delirious revealed of a prank he suffered from after allegations were made that he had messaged an underaged girl many years ago prior to his YouTube career while Delirious was in his 20’s. A curious and excited Delirious was tricked by two of his friends, whom he did not name, to voice chat with a girl apparently doing lewd things, not knowing the girl herself was in on the prank.

He later revealed that, again, unbeknownst to him, the girl was apparently 17 at the time, causing Delirious serious trust issues with his friends before they all let the matter die and moved on. Minutes after Delirious posted a TwitLonger about the situation, Marcel, also known as BasicallyIDoWrk, openly admitted to being one of the friends that tricked Delirious, openly taking responsibility for it over the years and stating that he had apologized to Delirious profusely over the years since the incident happened.

On April Fools 2015, he made a fake face reveal video which revealed his GTA V character’s face instead of his own face.

On April Fools 2017, he again made a second fake face reveal with the help of his YouTuber friends, Daithi de Nogla and MiniLadd
On April Fools 2018, he uploaded a video with the title “FORTNITE BR – WHERE’S THE ENEMIES?? (My first face cam!)”. As it turned out, he had an animated version of his current Gmod character play the game, also including some easter eggs of his friends.

Throughout 2017, he and his close friends on YouTube suggested that he never showed them his face. Terroriser jokingly demanded on Twitter and his videos that he reveals his face.