Who Is Jar Jar Binks In The Star Wars Prequel Trilogy? 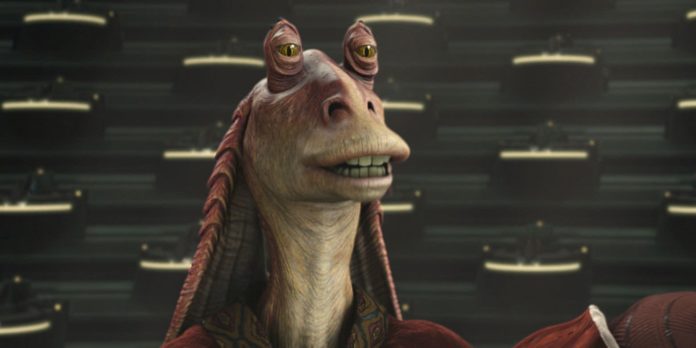 Jar Jar Binks is a fictional character introduced in the Star Wars prequel trilogy as a Gungan, an amphibious life form from the planet Naboo. The character was poorly received by fans of the franchise, with many speculating he was created solely to appeal to younger audiences. In October 2015, a fan theory began circulating online that Binks was secretely a Sith Lord who would be revealed in the upcoming film Star Wars: The Force Awakens. Who Is Jar Jar Binks In The Star Wars Prequel Trilogy?

On May 19th, 1999, the film Star Wars Episode I: The Phantom Menace, in which Binks is introduced as a clumsy alien humanoid from the planet Naboo, who is saved by Jedi Knight Qui-Gon Jinn after being banished from his tribe. Binks went on to appear in the prequel films Attack of the Clones and Revenge of the Sith, where he becomes a politician and famously delivers a speech to the Galactic Senate granting Chancellor Palpatine emergency powers.

On March 31st, 2011, Improv Everywhere released a phony prank film in which a man wearing a Jar Jar Binks mask is assaulted on a subway train (left). On February 16th, 2013, YouTuber Tim Fryer uploaded a montage of Star Wars scenes titled “The Worst of Jar Jar Binks,” which included the “Trololo” song playing in the background.

On November 5th, YouTuber withmorten2 uploaded a clip from The Phantom Menace that was edited to depict Binks’ death. Within three years, the video had more than 2.8 million views and 3,200 comments. On April 27th, 2015, YouTuber murdockmotion published a spoof Star Wars: The Force Awakens trailer titled “Star Wars: The Binks Awakens.” Within eight months, the film received over 1.6 million views and 770 reactions.

Additionally, Jar Jar’s negative reception from Star Wars fans has overshadowed his contributions to the franchise. Joe Morgenstern, a writer for The Wall Street Journal, referred to Jar Jar as “Rastafarian Stepin Fetchit on platform hoofs, crossed annoyingly with Butterfly McQueen.” Patricia Williams of critical race theory compared Jar Jar to blackface portrayals. On June 14th, 2009, CNN published an article about the character, which stated that Lucasfilm and Ahmed Best had denied allegations of racism against him. On January 3rd, 2015, the Nerdgasm Channel YouTube channel released a video addressing the issue of whether Jar Jar might be considered a racial caricature.

On October 30th, 2015, Redditor Lumpawarroo posted a thread to the /r/StarWars subreddit suggesting that Binks is, in fact, a “trained Force user” and “Sith collaborator,” who would be revealed as an antagonist in The Force Awakens. The idea links specific events from the prequel trilogy to illustrate that Binks was collaborating with Darth Sidious. Within two months, the article had 38,130 votes (98 percent upvoted) and 6,500 comments. Several YouTubers subsequently uploaded videos explaining the concept (shown below). On December 7th, The Force Awakens producer Kathleen Kennedy confirmed in a news conference that Binks would not be featured in the forthcoming film.

Who Is Jar Jar Binks?

On February 2nd, 2017, Drudge Report, a conservative website, posted an image on their homepage showing missiles being fired. Among the missiles’ smoke in the graphic is a tiny picture of Jar Jar Binks.

The photo was taken from a 2008 WhatTheCrap blog post that mocked Iran’s phony missile launch photograph of the year. It’s possible that it was put there on purpose, but numerous media organizations, including Gizmodo, The Verge, Mediaite, and others reported it as a mistake. Drudge Report kept the image on the front page until 3:15 p.m. the same day.

Read Also: When is ‘What to Do with the Dead Kaiju’ coming: Cast, Plot & Latest News