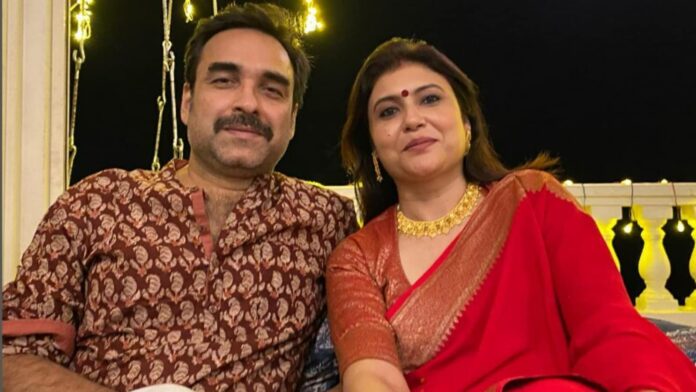 Pankaj Tripathi is an Indian actor who moved to Mumbai in 2004, Firstly he played role of politician in Tata Tea ad and subsequently performed an uncredited role in the film Run. Tripathi is the recipient of several awards including a National Film Award, a Filmfare Award, a Screen Award and an IIFA Award.

Tripathi was born on 28 September 1976 in a Bhojpuri Hindu Brahmin family in Belsand village (Barauli block) of Gopalganj District, Bihar, to Pandit Benares Tiwari and Hemwanti Tiwari as the youngest of their four children. His father is a farmer and priest.

Tripathi spent his childhood on a farm with his father until he was in the 11th grade. He used to play the part of a girl during festivals in his village nata, which was liked by the people and eventually encouraged him to become an actor.

Pankaj met Mridula in 1993 at a wedding. She was Ninth and he Eleventh standard then. Pankaj fell for her instantly. The caste system prevented them from marrying as they were family by way of his sister being married to her brother, but after much convincing their parents agreed on January 15th, 2004. They moved to Mumbai after their wedding, where they had a daughter named Aashi Tripathi in 2006.

Mridula Tripathi seems to be in her 40s. She is of Indian nationality. She belongs to Hindu religion.

Pankaj Tripathi made his debut in Tamil cinema with the film Kaala, which was released on 7 June 2018. He also appeared in the 2018 web series Mirzapur and Mirzapur season 2 available on Amazon Prime and in the 2019 web series Sacred Games available on Netflix.

In 2012, he made his breakthrough, when he was widely acclaimed for his role in Gangs of Wasseypur. His audition for film went on for approximately eight hours. Acting is his main source of income. His net worth is estimated to be 50 Crore+ INR.