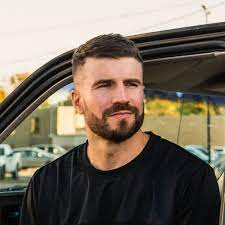 Hunter’s life is a story straight out of a Hollywood script. He began his career as a serious contender for the NFL before progressing to becoming one of the most popular country music artists. Not only is Hunt now a well-known musician, but he’s also regarded as one of the most innovative and forward-thinking voices in country music because to his use of various genres such as R’n’B, Pop, and Hip Hop into his songs.

In 2014, Hunter released his debut album, which was both critically and commercially successful. Find out more about this trailblazing artist, including how he met his wife who served as the inspiration behind his first album.

Sam Lowry Hunt was born on the 8th of December 1984 in a rural part of Georgia known as Cedartown. He hails from a family of five which includes mom, Joan, and dad, Allen. He also has two younger brothers named Van and Ben. Hunt grew up in Cedartown and attended Cedartown High School. He excelled in football while in school and was named a Georgia first team all-state in his senior year. He was also nominated for the Heisman high school trophy; a prestigious award given to the country’s most esteemed high school athletes.

Hunt pursued his football dreams to Middle Tennessee State University where he played as a quarterback. He, however, did not get regular playing time and after two years, he transferred to the University of Alabama at Birmingham. Hunt finished from UAB in 2007 with a degree in Economics. Upon graduation, Sam Hunt briefly tried out for a place at the Kansas City Chiefs but did not make the team. It was at this point that he said goodbye to football.

With regard to music, it could be said that Sam Hunt stumbled into it. While in high school, he came across a guitar belonging to a friend and used it to teach himself how to play. Hunt had always love country music but also fell in love with the rap, R’n’B and pop music that he would always hear in the locker room. He started writing songs during his spare time and would often perform for his friends and roommates. It was his roommates that urged him to start performing publicly. When his NFL dreams fell apart, Sam Hunt picked up his guitar and moved to Nashville to pursue music.

In Nashville, he wrote songs for popular country singers such as Kenny Chesney, Keith Urban, and Reba McEntire. He also released a mixtape, Between the Pines, in 2013. All this was enough to generate a much-needed buzz and in 2014, he landed a recording deal with MCA Nashville.

Sam Hunt released his very first album, Montevallo, in October 2014. The album contained hits such as Leave the Night On, Take Your Time, House Party, Break up in a Small Town and Make You Miss Me. The album was a monster hit; four singles from the album not only topped the country charts but were also certified platinum. The album was also nominated for the best country album at the 2015 Grammys.

The country star is happily married to his long-time girlfriend, Hannah Lee Fowler. Hannah is a nurse as well as a native of Alabama. Even though the couple is very private, their love story is well-known in the music industry. This is because their relationship has inspired many of Hunt’s songs. In fact, his very first album is named after Hannah’s hometown of Montevallo.

It must, however, be noted that their relationship has not been a bed of roses. They started dating in 2008 and broke up on a couple of occasions only to get back again. The couple finally got engaged in 2016 while vacationing in Israel. Hunt and his wife tied the knot on the 15th of April 2017. The private wedding ceremony, which featured about 150 guests, was held in Hunt’s hometown of Cedartown. For their honeymoon, the couple vacationed in Hawaii.

Sam hunt has a net worth of $3 million. His sources of income include album sales (both digital and non-digital) as well as ticket sales from tours. Hunt has headlined two sold-out tours; The Lipstick Graffiti Tour (2015) and 15 in a 30 Tour (2017). He has also performed at the concerts of other musicians such as popular country music group, Lady Antebellum. Hunt has received many awards in the course of his career. They include breakthrough male artiste of the year at the 2016 American Country Countdown Awards as well as the new artiste of the year at the 2015 American Music Awards.

The singer boasts of black hair and hazel-colored eyes. Hunt’s swoon-worthy good looks, combined with his smooth but rugged voice, have made him one of country music’s hottest properties.